The last year has been a strange one for seeking love, but it may have been the reset people needed to realize they were ready to commit. In March 2021 – one year after the first lockdown orders were given – Evan Schein, head of litigation at Berkman Bottger Newman & Schein LLP and host of the Schein On Podcast, sat down with NYC matchmaker Amy Van Doran. Van Doran is matchmaker and the founder of the Modern Love Club, and she spoke with Evan Schein about her work, the future of dating, and so much more.

Did you miss Episode 8 of the Schein On Podcast with guest Amy Van Doran? Listen here! 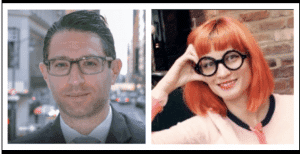 Did the pandemic cause a reset romance?

Early in the conversation, Van Doran spoke about how dating was changing a couple of years ago. She was concerned, she said, that people “people were just collectively not going to get it together.” More and more people were turning to Tinder and apps on their phones to find the next person to date. But then, as Van Doran put it, something “kind of crazy happened” – the pandemic:

It took a year of people being forced to be alone, not knowing how to date and going through their issues – and people are coming out of the woodwork. And they’re like, “Actually, you know what? Having a partner that I have a heart and mind connection with, that I want to invest in for the rest of my life is actually really important,” because they really figured out… when they got real with themselves, and they sat with themselves for this last year, and they did that personal work, they’re like, “Actually, no. Life is better with a partner, with a real connection.”

And so the pandemic has been sort of a blessing for people wanting relationships.

Van Doran went on to say that, based on her experiences as a matchmaker, couples are now bonding more quickly, and having “serious and difficult conversations” and are being generally more considerate of the people they’re dating. In short, people have been doing what they can to make it work. “Love doesn’t stop,” she said.

Dating on Zoom may have allowed for deeper connections

Much of this, Van Doran thinks, may have to do with the fear and uncertainty of dating during a pandemic. People who thought they would meet in person soon found themselves on virtual dates, but those virtual dates allowed for more deeper connections, perhaps, than people expected. You still have to set the scene as you would for an in-person meeting, Van Doran said. “Don’t be lazy,” she joked, as people will notice immediately if your bed is unmade, or if your dishes are piling up in the sink. (Point of note, ladies: if a man doesn’t have a living plant in his home, Van Doran warns, it’s not a good sign.)

But with video dating, you don’t have to worry about the physical part of your relationship. “I think it’s wonderful to not have to figure out physicality before you’ve connected from a heart and mind place,” Van Doran said. “We’re actually bonding before ‘hooking up.’ We’re forced to get to know each other. I think it’s wonderful.”

Van Doran also talked about how virtual dating allowed couples to connect who may not have met otherwise, based on geographical location. She predicts that this could lead to a lot of travel, in a post-Covid world, and continue to work from home. One of her favorite matches this year was between a client and a woman from Austin – a person he never would have considered before, given the distance between them. But now, all options are open:

There’s no longer going to be the “I’m a new Yorker. I have to date another New Yorker” kind of mentality. It’s “I can exist anywhere.” And, because people have been so starved for] traveling, they’re going to be told, “Yeah, you’re in California – I’ll come meet up with you! We’ll set up our little digital nomad situation, and let’s go to the beach Mexico.”

We learned out to digitally exist and now there’s a certain freedom that’s going to come with that, which is opening up love…. You can find amazing matches, and it’s not just based on who’s close.

What it’s like working with people who are getting divorced

Van Doran is one of the few NYC matchmakers, she said, who takes clients who are in the process of getting divorced. “Some of the easiest people to match,” she said, are those who “have been married and are going through a divorce, because they know how to be married, you know? And so, a lot of my clients that have been single for a very long time are actually harder to match than someone who’s coming recently out of a divorce.”

How a matchmaker chooses her clients

Finding love can be difficult even without a global pandemic, and working with a matchmaker can help. So how does Amy Van Doran choose her clientele?

“Coachability and openness are the number one things I’m screening for in a possible collaboration with someone,” Van Doran said.

She also pointed out (in response to a Schein On Podcast listener’s question about how to navigate this new dating world) that the only thing people can control is their approach and their attitudes, and both come in to play with regard to being open to new possibilities. When Van Doran first started in the matchmaking business, she was one of the only matchmakers taking on women as clients:

When I started matchmaking, there were no matchmakers that would take women on as clients. And so, the old model was, much older men that were very wealthy dating Eastern European 20-year-old women. It was like a casting: you’re old and rich, and they’re young and pretty. And so that was the entire matchmaking scene when I came on.

And I was like, “What if like we could make matchmaking cool?” What if someone just wants a more curated experience? And so, it was crazy that I was the first person to have a dating agency around here that gave women agency with their dating.

If you are looking for love and think a new kind of matchmaker is for you, you can book a one-on-one session with Modern Love Club, or contact Amy Van Doran for more information on becoming a client. You can also follow her on Facebook, Twitter or Instagram.