Whether it’s the NFL or the MLB, FIFA or the ICC, people all over the world are inspired by their home team and their favorite athletes. Scores of children hope that they’ll get to put on the uniform of those teams and play in the Big Leagues. American college and even high school athletes may receive the same kind of zealous accolades – and thanks to a recent Supreme Court ruling, some of those student athletes are going to start making some serious cash off their images and likeness.

Without financial literacy, there is a real risk that these student-athletes may face some financial troubles. On Episode 13 of the Schein On Podcast, host Evan Schein sits down with Wale Ogunleye, the former football player and current Head of Sports and Entertainment at UBS (Athletes & Entertainers Strategic Client Segment), to talk about his work, the importance of financial literacy, and the challenges young athletes face. 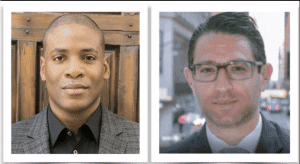 Did you miss Episode 13 of the Schein On Podcast? Listen here!

The time to start really thinking about money, Ogunleye says, is before you really start making any. “I think the moment you get drafted and you start thinking about money – or not drafted – you’re working from behind,” Ogunleye said. “It’s almost late in the game. That’s why with the initiatives we’re doing at UBS, we want to start at the collegiate level – go further back at the high school level – making sure that both men and women athletes understand the basic fundamentals of finance.”

Why so soon? Because, Ogunleye points out, the starting salary of a rookie pro player is in the hundreds of thousands of dollars. “If you’re an undrafted player,” he said, “you’re still probably making more than 99% of the people that you graduated with from university.” That realization can be overwhelming for young athletes, and so the best thing they can do is start saving and investing. This is especially important, Ogunleye says, because young men and women need to “know that this type of money is only going to happen in a short period of time, and the planning starts immediately.”

Ogunleye goes on to explain:

With the new likeness and image [ruling], I think it’s imperative that universities, families, and the athletes themselves take a more proactive approach at understanding what money is. And it’s not about Accounting 101, okay? No one talks in accounting terms. We need real life lessons: budgeting, balancing your checkbook, savings…

Because we look at some of our athletes as pretty much lottery winners, right? You wake up one morning and you’ve got an influx of zeros in your bank account, but if you do not understand what money is, it can become a problem. And that’s where in the past we’ve seen the headlines of athletes, falling into bad investment deals, flat out going broke; guys who have made hundreds of millions of dollars losing every penny.

That’s because there’s been, one: lack of guidance, but more importantly, there’s been a lack of education on the financial tip.

Athletes who are doing it right

One athlete who has the right idea is Alvin Kamara, running back for the New Orleans Saints. In a recent interview on Uninterrupted, Kamara talked about how he hasn’t spent a dime of his football money, instead living off the money he earns through endorsements. “Honestly, when I saw that article [about the interview] I wish I was next to Alvin at the time. I would’ve given him a big hug. I actually wish that I knew him ‘cause I want to hold his hand through the streets,” Ogunleye said, laughing. “I saw that article, and I sent that to every single one of my young guys, to say that this is exactly what we’ve been trying to talk. This is exactly the mindset we want you in.”

One of the challenges Ogunleye discussed is how having such an influx of wealth could put young players in precarious positions. “It’s tough,” he said, “And I think that the athletes nowadays have it way more… It’s more complicated.” Social media, he said, could be a challenge because there are so many people watching you: on TV, in commercials, on social media. He likened it to survivor’s guilt: Why am I the one who made it out? Others, he said, might try to go too far in the other direction, taking a different car to the gym or not using a specific type of credit card in public.

These are just some the challenges that young athletes face – challenges that UBS’ group is addressing. Ogunleye talked about UBS’ partnership with the Southern Intercollegiate Athletic Conference (SIAC). The initiative focuses on “delivering a financial literacy and wellness curriculum to SIAC students, and [introducing] students to the opportunities available for them in the financial services industry,” per SIAC.

This is important work, Ogunleye believes, for two reasons: the financial sector “needs a little bit of diversity,” he said, but it also helps encourage those in more marginalized communities to start planning their financial future sooner. UBS has also partnered with Goalsetter Foundation, a “movement to put every child in America on the path to financial freedom.” Goalsetter’s plan, Ogunleye explains, is to open a million bank accounts in marginalized communities. “If we could start early on in getting these bank accounts, a lot of [these young men and women] are more highly likely to go to college, and a lot of more are more likely to invest later on in life.” It’s this philanthropic arc, Ogunleye believes, “the heart part” as he called it, is what separates UBS from other financial institutions.

At the end of the interview, Ogunleye circled back to how UBS can help professional athletes get the financial literacy and assistance they need to create their own legacies. To learn more about how UBS can help, check out the Athletes & Entertainers Strategic Client Segment.

The attorneys at Berkman Bottger Newman & Schein LLP are here to help when you have questions about divorce or family law matters. Schedule a consultation today by calling (212) 466-6015 or filling out our contact form. Proudly serving New York, Westchester, and Bergen County, NJ.