Attorney and host Evan Schein welcomed Dr. Chitra Raghavan, forensic psychologist and professor at the John Jay College of Criminal Justice, to Episode 7 of the Schein On Podcast for an informative discussion about non-physical forms of domestic violence. Dr. Raghavan and Schein discussed the effects of coercive control on a victim, its warning signs, and how the courts can work to better spot the signs of this type of abuse.

Did you miss Episode 7 of the Schein On Podcast? Listen here!

In a New York Times article published earlier this year, a number of women shared their stories of domestic violence. These brave abuse survivors all have one thing in common; they were victims of a form of abuse called coercive control. Although coercive control may not manifest in physical injury, it still causes trauma to its victims. 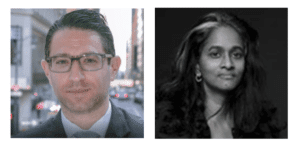 What is coercive control?

In a domestic violence situation, coercive control is different – and much more – than physical assault. Dr. Raghavan says that “the goal of coercive control is to undermine the target’s authority; to strip them of decision-making skills, to make them feel dependent and helpless. This is done through the constant use of different tactics that are interlocked, and loop back and affect each other.” These tactics, she explains, can be overt – like screaming or physical abuse – but also “smaller, invisible” tactics of abuse that can pervade a victim’s life.

One common method of this invisible abuse is financial control. In some marriages or relationships, one partner may hold the majority of the assets and income. With domestic abuse, that partner might use their financial power to control the other. Financial control can including requiring a partner to hand over their paycheck, forcing them to have an allowance, or otherwise restricting and limiting their finances.

Dr. Raghavan notes a potential warning sign of financial control is when “one partner knows all the finances but you don’t actually know about theirs; it’s a power imbalance.” She stresses that even though it’s a tricky discussion, partners should be upfront about money early on in the relationship, including prenuptial agreements, which can help avoid these types of power disparities:

Money is a tricky thing to discuss with a partner until you’re a little bit more invested or committed in the relationship, and that’s part of the difficulty – yet at the same time, if you start to feel like the person’s not been entirely honest with you, I think you need to ask….

Something that we’re all squeamish about, particularly when there’s a lot of money, are prenuptials. We shouldn’t be squeamish about it. Because that really just puts the amount of money out there, and you can talk about it honestly. I think it’s reasonable that if you make a lot of money, you want to protect it. I think it’s equally reasonable that if you’re going to enter a relationship that you know how much money there is, and what it means in terms of your power, your decision-making, your entry into the relationship, and ultimately your dignity.

So have a frank talk at the point where you think this might be someone that you may be committing to, and what it means for both of you, that one partner has more money than the other. It’s very difficult. We all cringe, but I think it needs to be done.

One of the biggest issues domestic violence survivors face in court is the lack of physical evidence of their abuse after suffering psychological manipulation and control at the hands of their abusers. Understanding coercive control and how it affects its victims is the best way attorneys and courts can advocate for survivors of domestic abuse. Dr. Raghavan explains the financial control example, and also a red flag of psychological manipulation called “love bombing.” Although this behavior can seem sweet and charming at first – excessive and “grandiose” love texts claiming you are the only true love of a person’s life, for example – it lays the groundwork for controlling a partner’s life. Physical gestures, like showing up at someone’s work, can also be a sign:

I would be very nervous if someone shows up at work. And why is that? Work and private lives should be kept separate until – unless you work together; then it’s complicated – you start to get deeper into it. If someone starts to enter your work life and you didn’t invite that person, it’s a sign.

And [if the person] says it romantically, “I was so excited. I couldn’t wait. I want to pick you up every day,” It actually means they’re encroaching on your independence – on your financial independence, but also your work identity. I would take that very seriously.

So love bombing is taking up all of your time, but saying to you “I’m doing this because I’m so dazzled by you.”

She told Schein that love-bombing takes a person’s time away from family, friends, and work, which can be isolating and dangerous. Abusers believe, she says, that they have a right to you: “I’m so completely in love with you; therefore, I deserve to own you,” they might say. She explains, “It’s to essentially take over all aspects of your life. It’s about ownership.”

How can the court help victims of coercive control?

The key to helping survivors of this type of domestic violence is understanding it. Many clients fear they won’t be taken seriously if they don’t have visible injuries, didn’t call the police, or didn’t receive medical treatment. These concerns are legitimate.

As Dr. Raghavan points out, the courts often may not identify the “smaller, repetitious tactics that rob people of their power…. It is not criminal to humiliate and degrade and emotionally deceive your spouse…. So sometimes courts cannot act. Sometimes courts don’t recognize that they can act, and that these acts of abuse are invisible.”

Understanding the dynamics behind coercive control helps the courts and attorneys understand why many victims don’t call the police, and why they may not initially leave. Victims become conditioned by their abusers to believe that they cannot leave, they cannot handle life on their own, and, perhaps most importantly, they will now take on the identity as a victim of abuse.

Dr. Raghavan wants courts and juries to understand that everyone’s model of a relationship isn’t the same, and the legal system must take care in their opinions about abusive relationships. As she points out, “We’re taught to handle our emotional problems. We are taught to invest in relationships and stay in them.” In that vein, we cannot blame victims if they don’t initially leave an abuser.

She notes that these types of cases don’t “come out of the blue.” Victims of coercive control typically may not reach out for help until the abuse has escalated beyond their control.

If you are a victim of domestic violence or coercive control, the New York’s Office for the Prevention of Domestic Violence (OPDV) can help:

Find out more about Dr. Raghavan

Dr. Chitra Raghavan is a forensic psychologist in New York City, specializing in domestic violence, sex trafficking, and sexual harassment. She is the deputy director of the forensic mental health counseling program and the coordinator for the victimology studies in forensic psychology at John Jay College of Criminal Justice. Her work has created case law in the state of New York.

The attorneys at Berkman Bottger Newman & Schein LLP can help in all matters of divorce and family law. Schedule a consultation today by calling (212) 466-6015 or filling out our contact form. Proudly serving New York, Westchester, and Bergen County, NJ.